Possibility that President will withdraw gazette before defeat on 7th 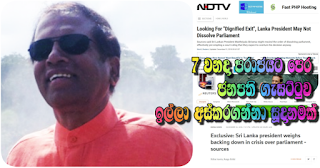 Possibility that President will withdraw gazette before defeat on 7th

Confirmation reports have been received that the final judgement of Supreme Court would be pronounced in relation to gazette notification which gave rise to a debate in parliament and call for a general election. Clues have been received in this connection at discussions held with Tamil National Alliance on Friday and it has been confirmed close sources of President. This has been confirmed by
Reuters News Agency today (1) as well as NDT News of India and other media.

President's gazette announcement dissolving parliament which was subjected to a three-bench judges heard recently was considered a course of action violating the constitution and in case it is accepted by Supreme Court, there is a risk attached to it where President Maithri would have to bid farewell before his tenure of one year early. Every President assumes his duties by taking his oaths in accordance with the constitution and violating it means having to forego his position. Though Mahinda was appointed as Prime Minister and he was given time to accumulate his majority after finishing the parliamentary session, Mahinda and Basis and S.B. and the group it was seen that there was no results forthcoming and under such circumstances instead of facing defeat, the President took steps to dissolve parliament and call for a general election.