"I will not take Ranil as Prime Minister as long as I live!" -- Maithripala Sirisena 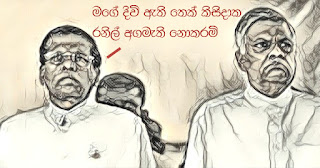 "I will not take Ranil as Prime Minister as long as I live!" -- Maithripala Sirisena

President Maithripala Srisena emphasised to reporters of foreign media institutions at a discussion that he would not appoint Ranil Wickremasingha as Prime Minister as long as he lives. "I told them very clearly not to bring Ranil Wickremasingha before me even if United National Party has the majority", he had said. When journalists queried the reason to dismiss him from his position, French News Service  has reported
that President has emotionally expressed saying, "I ousted Ranil Wickremasingha from his position on 26th October and I had to do it because he was an utterly corrupt person. He was corrupted. His finance policies are not good for local industries. He followed a sheer liberal system of government which does not suit our culture. I just could not bear it".

When the President was questioned whether it has been proved anywhere that he is a corrupted person, the President has responded saying, "I will take action to appoint a Presidential Commission of Inquiry to look for corruption and frauds that took place from 2015 onwards under Ranil's government. Then we can see".

Finally the foreign journalists questioned what the solution is for this situation where the country is in a confused state with Mahinda not having a majority. President Maithripala has then said, "if the majority is there ... the United National Party can can bring another person". Towards October 26th too when the position of Premiership was changed, what President had said was that if Ranil is appointed that he (President) will not remain in the President's chair for even an hour.