Ranjan's voice cuts 4 -- About Sangitha; about Champa; about Wijedasa and with Hirunika 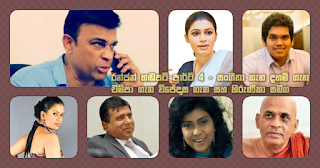 Ranjan's voice cuts 4 -- About Sangitha; about Champa; about Wijedasa and with Hirunika

Among Ranjan Ramanayaka's voice cuts which are being daily updated, 4 voice cuts released to social media today (9)are published here. One is where getting together with Hirunika Premachandra, blemishes of Mrs. Sajith are spoken of while Ranil is being praised is one such. Among the others are two where Daham Sirisena and Wijedasa Rajapaksa are spoken about with Shani and instances of dialogues where singer Champa Kalhari, Elle
thero, Sangeetha Weeraratna and others are spoken about with some others.