Crisis because Harry - Meghan couple has broken away from royal family 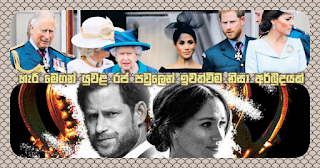 Crisis because Harry - Meghan couple has broken away from royal family

Since it was announced that Harry - Meghan couple of the royal family are to keep away from royal duties, the queen has become agitated.

Prince Harry has informed that he and his wife (Duchess of Sussex) have decided to free themselves from monetary involvements and stay
independent and this upset emerged after that. Though the queen has asked prince Harry to reverse this decision, it is reported that the decision would be taken forward disregarding the request and thus the decision of Harry and Meghan to stick to their decision has created a royal headache for the queen, media of that country has said.

It is stated that after the announcement a serious disappointment has pervaded the palace. Initially the couple had left an instagram post and Buckingham palace told media some hours later the the situation has become 'complex'. CNN had reported quoting royal news sources that officers who carry out activities on behalf of the queen, prince Charles and prince William have held discussions on Thursday as to what action should be taken about the announcement.

The couple has revealed through their social media that they had arranged to spend the time in United Kingdom and North America in future. The two of them have even gone ahead in removing the wax statues kept for exhibition at Madam Thusad museum together with members of the royal family. Further details are included about their vision for their future in a new website opened by the couple. What is inferred by it is that while Harry and Meghan are hoping to be economically independent and that they are to stay away from things for which British government is providing funds. They are also making arrangements to occupy Fogmore cottage which was recently renovated which incidentally is their official residence at Windsor.

It has even been a problem in the minds of the queen as to how Harry and Meghan would be independent with regard to finances. So far this couple has carried on a problematic situation with regard to media. Last year in October a private letter send by Meghan was illegally published by a particular media and a legal case has been filed charging them. In the meantime charges were levelled to the effect that Harry has operated a 'brutal campaign' against his wife.

Prior to this it had been pointed out by critics that the traditional activities functioning within British royalty do not go hand in hand with Meghan who is an American actress. The new generation has frequently tried to go into conflict with the queen in this respect. Prior to this, even prince Diana has gone into conflict over this same topic and it finally resulted in she being cornered from the family and ultimately being pushed into divorce.