Priyan agitated because of Ranjan's voice cuts! -- Swears in front of Buddha statue! 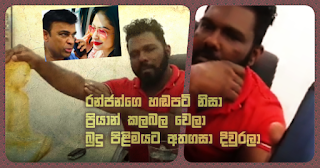 Priyan agitated because of Ranjan's voice cuts! -- Swears in front of Buddha statue!

With Ranjan amanayaka's telephone conversations being exposed, the character who was subjected to most talk was Priyan who incidentally became popular across social media as an opulent person. During the conversation between Piyumi and Ranjan, owing to the dialogue referring to him, Priyan has become terribly agitated and has gone to the extent of getting down those who handle YouTube to his house and is announcing his integrity over the camera.

In the said dialogues it has been broadcast how Priyan got his money, how he kept women and his
abnormal desire for popularity and his fear of getting trapped in some blunder; more than the previous matters, Priyan being a convict of having abused a child has upset him and talks about it. After the incident in the video released by Priyan he makes a exhibition-speech about his assets even displaying deeds of lands that he possesses. Later he keeps his hands on a Buddha statue and swears saying that his hands are clean.

Priyan does not respond to each and every aspect in the criticism of Piyumi and Ranjan and responds only to a part of it. He also talks big about Piyumi getting a loan of 6 lakhs from him and as depicted in that video Priyan makes an attempt to contact Piyumi and Ranjan and even visits Piyumi's home. It is understood that both of them in the midst of the confusion taking place, avoids Priyan without responding to him.

In the meantime various talks have sprung up in the internet and in one such comment, an extract of it says, "Priyan .. Menik's scene is this ... with the support of Piyumi, Priyan gets set with a girl .. not an indecent motive; with the hope of marrying her (according to what Piyumi says, it is a terrible lie). The backside story is told about him. Later during a chat between Priyan and that girl, Priyan has sent a photo of an indecent part of his body. They would have had great fun over it ... that girl in any case is a fast one, no. That photo is with Piyumi. (Ranja asks Piyumi saying, 'those are with you, no', referring to those photos. That girl of course has got set with another fellow and Priyan fellow blackmails her. She says that she will file a case saying that Priyan has raped her. Priyan who gets scared that his image would be spoilt, asks for help from Piyumi because she is Piyumi's friend.

To a great extent Ranja comes into the scene at that point across Piyumi. Piyumi who tried to take advantage of this situation wants to put the six lakhs loan Piyumi took from Pryan on his shoulders and waits without paying it back. (It is that Ranjan says, 'if your six is spared .. that's enogh'). In 5 minutes and 5 seconds Ranja says,  'even if legal action is filed ... it will take time for Priyan being released after the case is over. It means that Priyan has to a great extent free from guilt. But the fellow is scared because until the case is over, he will be the suspect and have a black name attached to him'. Because by now Priyan has managed to built up a great name for himself and Piyumi is taking a big advantage of it. Piyumi's talk which exposed about Priyan, from below