"Ranjan's CDs need not be sent everywhere ... if there's any fault, tell" -- Ranil 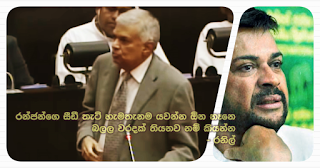 "Ranjan's CDs need not be sent everywhere ... if there's any fault, tell" -- Ranil

In a dialogue which took place in parliament yesterday said that is not necessary to send these things everywhere ... and if some mistake has been made ... an inquiry could be made about those
individuals ... and it be made from one place. In the instance of a gun shot being heard from close to Ranjan's house, in the incident which took place in the year 2016, the manner in which the incident is told to police where Ranil has given a call to Ranjan by giving instructions has by now is circulating in social media and in the process Hiru, Derana and media networks have yesterday accused Ranil as having said lies. Seen below is the telephone call Ranil has given Ranjan and opinions expressed by Ranil in parliament and about information being leaked out.