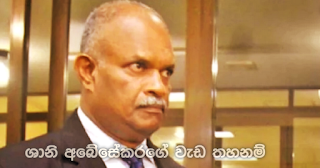 Indicating that on an order of national police commission, former director, senior police superintendent of criminal investigation department, Shani Abeysekera's duties have been suspended.This decision has been arrived at as Shani Abeysekera being accused of having conducted himself on a partial basis in the CID during the past regime and it was after information being
discussed across telephone about the court case with Ranjan Ramanayaka was publicised by media yesterday. When these telephone dialogues were not presented to court, these remained as production of the case, these have been handed over to media and broadcast.

The commission has alleged that Sri Lanka police service has been subjected to humiliation through the telephone conversations. Senior superintendent of police Shani Abeysekera was expelled from his position as CID chief and instead assigned normal duties at deputy inspector general's office in Southern province in just a few days after the new regime came into power and during that period though various politicians threw out accusations against him ... there was no evidence in that respect. With Ranjan's voice cuts now they have supplied the evidence. Police headquarters have announced today that Mr. Shani has been transferred to police headquarters and been suspended from duties.

The police commission has informed acting inspector general of police, Mr. C.D. Wickramaratna to report to national police commission within a fortnight after conducting a preliminary inquiry against allegations relating to Mr. Shani Abeysekera with immediate effect.

He in fact was a person who won acclaim for having successfully completing well-known investigations which included the Royal Park murder, Angulana dual murder, Udathalawinna murder, Mohommed Syam murder, the twenty million robbery and the Town Hall bomb case.Shani Abeysekera who was in the process of investigating several sensitive issues such as the Thajudeen murder, Prageeth Ekneligoda abduction, Lasantha Wickramatunga murder, the assault on Kieth Noyar and Upali Tennakoon as well as the Rathupaswala shooting was indeed the most skillful officer and thus under these circumstances he would miss the opportunity of presenting relevant matters at court hearings when court is to be called in future regarding the said court cases.