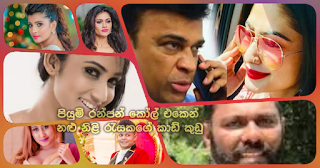 The dialogue opens up with a story connected to Priyan aiyya, a gem businessman who has become a popular character both in the YouTube and facebook these days. What Piyumi tells Ranjan is that Priyan has tried to build up a church destroyed by the Ester attack at his own expense with the motive of grabbing popularity and as the government is undertaking the same thing .. the priest has told him that it is not necessary and thus he has had to fold up intended benevolent act. Though he has tried to grab publicity ... Piyumi criticises Priyan saying that the motive is not good. What Ranjan on the other hand says is that he appears to be somewhat 'mental', 'psycho-type' and by paying for gossip to gain publicity and thereby claim a title. Piyumi says the man has lost his reputation and that he had called her to search for the girl concerned. What Ranjan then says is that if children's - women's bureau comes to know about it, everything will be finished.

In this conversation Piyumi says that the reason for Priyan to be in possession of such a big sum of money is not a gem mine but that he has come across a treasure. Piyumi has further added that Priyan would keep breaking rest. Other than Priyan ... Piyumi has named that the beautician Chandimal too is someone who breaks rest. When he doesn't fall asleep; he calls me. He invites me to go to various places in the night hours. Priyan aiyya is on facebook all 24 hours. Piyumi has opened up a salon with a loan from Priyan, it was said. In the process Ranjan has said that Priyan had told him that for the forthcoming election the entire expenses for the election would be footed by him; for which Piyumi responds saying not to get caught for those things. Piyumi has further stated how she gave her support to secure a young girl called Suba for Priyan.

In the meantime a dialogue emerges about model Kaushi who gained popularity because of luring tantalising bust photos displayed in social media. A dialogue then crops up about model Kaushi regarding a talk that floated last April referring to a mistake made in writing in trying to write the word 'tourist' ending up by writing it as 'terrorist'. Piyumi criticises her saying, "She's doing those things to get publicity. She has no knowledge of English. It's me whom she follows ... but most of the time she gets into an utter mess", Iyumi says.

In this conversation she speaks of Kaushi as a dancer of Channa. What Piyumi says is that she got wedded to a rich boy and went aside. She adds that he is a Muslim heroin dealer. In this instance Ranjan says that this young girl makes use of Musammil's sons and Hashim's sons. Piyumi on this occasion reveals that Musammil's sons would come with a stack of 5000 cash notes in a McDonald's bag and would enjoy themselves in the night. Piyumi says, "For just one night a sum of 5 lakhs is spent on heroin. When in clubs ... we are given money telling us to go and drink and pay the bill. Ranjan then says to refrain from taking such things as Extasy' and 'Ice'.

In the meantime, when talking about actresses who use heroin ... names such as  Nadeesha, Aksha Sudari come into the open and the talk continues with comments indicating how 'jaws have fallen, and see the faces ... like human skulls; that's because of indulging in those things'. Whatever it is, what Piyumi says is that Akshari Sudari has come to that state because of having had a plastic surgery abroad. Piyumi even says that Akshari Sudari for having been involved in a fraud of 14 crores ... it would not come right for her. She still goes to Dubai to find lakhs of money. "She just can't wait on a side by enjoying a glass of wine ... she craves for that".

"Our Tina of course is not that type", Piyumi comments at one time. When Rajan asks,"Isn't Dulakshith's jaws are withdrawn they say that the subject is Piyumi. In the process when Ranjan asks isn't Dulakshi involved in deals ... Piyumi responds in the negative.The complete video, from below