If Sajith comes, if Gota comes ... special statement about presidential from Maithri 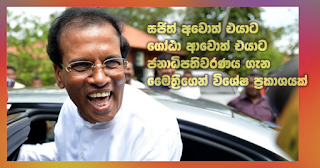 If Sajith comes, if Gota comes ... special statement about presidential from Maithri

President Maithripala Sirisena is expected to make a special statement in connection with the future presidential election, it is reported. The president is expected to  make this statement during the first two weeks in the month of November, political sources say.

The president who arrived in in the island last night (27) after an official tour Japan and prior to this
official tour the president has confronted representatives of minister Sajith Premadasa's party, it is reported. What Sri Lanka Freedom Party said sometime back was that president Maithripala Sirisena would be taking part as an independent candidate in the forthcoming presidential election. Accordingly, professor Rohana Lakshman Piyadasa is to be bestowed the position of chairman of the Freedom Party until the presidential election is over.

It was earlier revealed that president Maithripala Sirisena has a liking to come to parliament from the national list and function as the minister of environment at the forthcoming presidential election and has mentioned that he has uttered a statement in advance that he would not be retirement but engage in politics till he is among the living. Though a rumour has circulated that president would be present on stage with Gotabhaya Rajapaksa, leaders of Pohottuwa have prevented it. The reason was that if by chance he faced hooting ... it would no doubt be an utter shame for him. Whatever it is, the strategy of president Maithri this time is to enjoy an accepted position by safeguarding both factions.

It is reported that some organisers of the Sri Lanka Freedom Party are rendering their support to Sajith. It is further reported that former president Mrs. Chandrika Bandaranaika is to address the rally on the occasion when minister Sajith Premadasa's memorandum is to be launched.