Culprit who cheats people by playing role of various characters ... nabbed in Pettah! 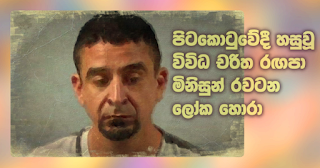 Culprit who cheats people by playing role of various characters ... nabbed in Pettah!

A man who has pinched lakhs of rupees from people by duping them having played the role of teacher at one time, police officer at another time and as a hotel employee was taken into custody recently at Pettah bus stand, law enforcement unit of Kalutara division says.

A person in Wadduwa happened to have met this man casually a few weeks before and on that occasion he has introduced himself as a tour guide, police say. This suspect who is eloquent in the English language has told the person in Wadduwa that he had at for sometime functioned as an English teacher and that if there are schoolgoing children he could teach them English. The Wadduwa person who was hoodwinked by the speech of this person had proceeded to get his newly found friend to his home and had directed his two children to this man, police say.

Since there was no news about this tutor who came to give English tuition for about three weeks, the householder has been unable to find him. The householder has for an emergency looked for some gold items in the house and to his surprise he found that they were missing and having been stupefied has inquired about it from his two children. They then responded saying that one day he had given them some English lesson to do and had gone inside the house, police say. Police say that the householder has made a complaint in that connection to Wadduwa police.

On the complaint so made inquiries were made by law enforcement unit of Kalutara division and finally was able to arrest the suspect at Petah bus halt. On interrogation it was possible to get at further information about several other instances of robbery he has committed. About three months back the suspect has been lodging at a hotel in Minuwangoda in the capacity of a 'koththu baas' and it was revealed about two robberies he had carried out after having entered two boarding houses adjoining his room, police say.

Police say that it was revealed that even warrants were issued against this suspect in Mahiyangana court and that cases have been filed against him concerning several acts of robbery in Gampaha and other places. The suspect has been confined to remand prison for some years and had been released on bail, police say. This 40 year old suspect is a resident of Ragama.