No cabinet meeting because of altercation with President 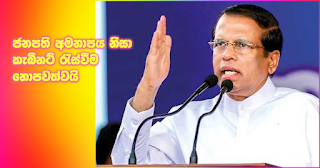 No cabinet meeting because of altercation with President

The President made a serious criticism about the working committee appointed to carry out an analysis with regard to exposure made on certain information connected with the recent Easter Sunday attack based on smearing his name. As a result the President called for a sudden meeting last 8th and has informed that he would not be present at cabinet meetings any further if meetings are continued making him the target.

The President has brushed aside reasons brought forward by the Prime Minister explaining that that
activities of the working committee is impartial and further mentioned that he is able to put a stop to civil servants coming there and providing evidence. The Speaker made a clarification last week about legal procedures referring to this matter explaining that when government servants are summoned to give evidence it cannot be evaded. Though a decisive rendezvous was to take place between President Maithripala Sirisena and Prime Minister Ranil Wickremasingha last evening (10) at President's official residence focusing on conducting the cabinet meeting, it has been postponed without a date and it is reported that today's (11) cabinet meeting would not be held accordingly. Irrespective of Presidential protest, the special selective committee is understood to meet today (11) and tomorrow (12).