Gnanasara thero to leave island for a period of time 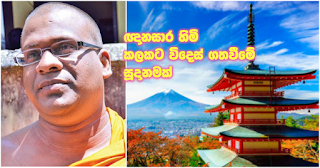 Gnanasara thero to leave island for a period of time

The manner in which general secretary of Bodhu Bala Sena organisation who was given the President's pardon recently in the way Galagodaaththe Gnanasara comported himself politically before being imprisoned has now taken a different facelift.

Though it was said that the thero stood on behalf of the Mahinda - Gotabhaya camp in particular;
what appears now is that he is a supporter of the SLFP faction headed by Maithri. The thero has even attended a tour of Kirivehera in Katharagama yesterday in the company of member of parliament, Mr. Dayasiri Jayasekera.

In the meantime, Gnanasara thero who was subjected to a charge of having disturbed and reprimanded a police officer in obscene language while on duty engaged in a raid on narcotics in Nawala, Rajagiriya was temporarily suspended from overseas travel on the order issued by Colombo additional magistrate, Mrs. Kanchana Niranjana de Silva in the instance when this case was called in court last 7th.

The thero's attorney at law has made a request from court to dismiss the prohibition imposed on Galagodaaththe Gnanasara thero since the thero is expected to attend a seminar which is being held in Japan. The attorney who appeared on behalf of Gnanasara thero mentioned in court that a relevant document to attend the said seminar had been given by Japan asking him to attend the event concerned during the period 2018 - 2021. As such, the thero would be leaving the island overseas, it is reported.