Bail for Sakvithi Ranasingha after 10 years 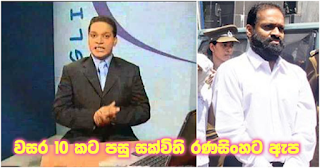 Bail for Sakvithi Ranasingha after 10 years

Sakvithi Ranasingha who grabbed a sum of over Rs. 162 crores from members of the public and carried on an illicit financial company and then fled by isolating the depositors was taken into custody 10 years before this in 2009 and ultimately ended up being imprisoned for 10 years there onwards -- he however was released on bail yesterday (11).

Having squandered public money on gambling was he was unable to pay compensation and since it
was not a registered financial company, the state inevitably had to mediate with those who wanted to claim their balance money but were unable to settle these issues. Apart from financial fraud, he had domestic cases too pending. As a consequence, he had to appear in court from time to time while still serving his jail sentence. Though he had the opportunity of being bailed out in some cases, there was no one to coming forward to bail him out and thus he continuously had to remain behind bars.

With the bailing out problem being resolved in Colombo high court after a period of 10 years, he was finally he was finally released from prison yesterday (10). As bail was deposited for three separate cases which were heard in court, relating to swindling public funds of over Rs. 162 crores against violation of the company act and maintaining a financial company of that nature; employing illegal methods of transaction without sanction of the central bank and engaging in fraudulent procedures of payment he was released yesterday (10).

Sakvithi Ranasingha who was a popular English tutor flaunting himself with the slogan 'I was born to teach', later opened up a building contractors firm and finally ended up as the owner of a financial institution messing himself up with the aforementioned cases. What he actually did was try to use his goodwill into commercial gain by directing the faith the public had, thus utilising it in an illicit manner and his clients invested in his firm which engaged in violation of the law.