What are Ranjan's clandestine voice cuts? 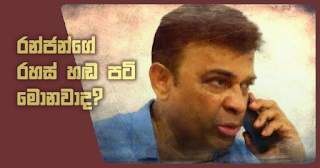 What are Ranjan's clandestine voice cuts?

Various political dialogues have cropped up regarding member of parliament Ranjan Ramanayaka being taken into custody and being released on bail within 24 hours. A posse of policemen who went to MP's official residence in Madiwela where member of parliament, Ranjan Ramanayaka on Saturday had focused attention mainly on Ranjan Ramanayaka's personal laptop hard disk and DVDs ... and ultimately a search was carried out and the MP was     taken into custody under
the allegation that he was in possession of a weapon which was licensed for 2017-2019 was not renewed for a period of 3 years.

Though it apparently was an instance where he was apprehended by trying to find some fault or the other or else revenge ... contradictory dialogues have copped up in this connection. Both those of the opposition as well as that of some MPs and ministers were published on behalf of this phenomenon. In the meantime, what one item of news said was that Ranjan's house was subjected to search because there is not sufficient evidence to corner former chief of the criminal investigation department Shani Abeysekera who presently is on punishment transfer.

Ranjan was taken into custody at 7.30 in the night on Saturday and was released at about 6 in the evening on Sunday. Though neither police spokesman nor parties representing the police did not reveal much information about it, an organisation appearing under the name 'Sinhale' had called a media discussion to publicise a voice cut of Ranjan and Shani. State minister Mr. Mahindananda Aluthgamage who received a new appointment as a spokesman of the government too revealed some matters addressing a festival. Several years before Ranjan has said that Mahindananda, the then minister addressing a political programme on Derana channel under the name 'Matara Sunil' saying "Oka hora" ending in a misunderstanding. What state minister Mahindananda said yesterday was CDs carrying voice cuts making influence on high-rankers of police across the telephone was found by financial crimes division. He said that over 120,000 phone conversations by Ranjan Ramanayaka carried on with Shani Abeysekera as well as investigation officer of criminal investigation department, Nishantha Silva who fled to Switzerland and other officers were found in CDs by police.

In the meantime, a representative of Sinhale organisation with whom anews discussion was held yesterday had got in possession of these telephone dialogues. He has revealed about this saying that the hard disk of these dialogues had come into possession of police through a three-wheel driver. Though the media inquired about this yesterday from Ranjan when he was bailed out, he refrained from responding because of involvement with court.

In any case, Ranjan Ramanayaka has said that as he was a member of COPE committee and was someone who always spoke about corruption, he has constantly delved into matters relating to various forms of corruption and that information relating to those across data is not an issue. Shown below is the revelation of Sinhale representative and the statement made by state minister Mahindananda