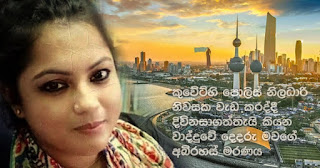 A mother of two children was employed at a house of a senior police officer in Kuwait and has met with a mysterious death last 23rd. The dead body was brought to her house in Melagama, Wadduwa last 3rd after a lapse of eleven days after her death.

The deceased is a 41 year old mother of two children named K. Darshani Deshapriya. She has gone as a domestic to serve at a house of a senior police officer in the kingdom of Kuwait last 20th
September. After her sudden death her corpse was dispatched in this manner to Sri Lanka. The two children Shehan Avishka and Sulochana Chathuranga and members of the family have expressed suspicion over this death.

Younger sister of the deceased, K. Jeewani Deshapriya (35) who expressed suspicion over the death said, "We never dreamed that my elder sister would face something like this. We were informed by phone last 22nd that akka was taken ill. Akka was taken to Kuwait hospital where she was recommended by doctor to be given saline for three days. But akka was brought home in just one day and has been bathed. There are three others living near the house where akka is staying. What they and and the house owner says is contradictory.Those in the house say that akka has committed suicide by strangling herself to death.

For what reason did she die ... how the home people treated her when she fell sick -- these are the problems that are worrying us. If an investigation is to be carried out ... we have all voice cuts of information that akka gave us before she died.

Another sister, Mrs. K. Thakshila Deshapriya mentioned: "It is my akka who has died. We told foreign employment bureau about akka's death. They asked us to go to the agency. The agency says that akka has committed suicide. Akka who went to get the house repaired will never take her life. A big police officer and a doctor is in the house where akka was staying. We are suspicious whether they are responsible for akka's death.

Mrs. Somalatha (70), mother of the deceased had this to say in tears: "It is my eldest daughter who has died. She went abroad to make her life a success. She was paid only two months ... no salary for December. Now both these children are left helpless. I ask the government to mete out justice for the two of them".

Mysterious death of mother of two children who is supposed to have committed suicide while employed at house of police officer in Kuwait
2020-01-06T08:03:00+05:30
gossiplankanews english
Newer Post Older Post