School activities disrupted because of strike 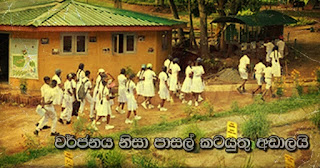 School activities disrupted because of strike

Morning reports say that school activities have been disrupted as a result of principals and teachers engaging in a strike today 4th all over the island.

Though Education Minister Akila Viraj mentioned yesterday that there is no need for alarm about the protest launched by trade unions against favourites being recruited to the teaching service and educational administration service and some other demands and that children could attend
school as usual, things did not turn out as said.

As a consequence of the strike, activities of several schools had been disrupted today (04), it is reported. Because of the strike scheduled for today, on suspicion that teachers would not turn up, attendance of students too were comparatively less. Though school children were present in some schools, there had been a drop in the attendance of teachers and principals, it was reported. A large number including principals, teachers and officers of the educational administrative service have taken sick leave because of this strike.