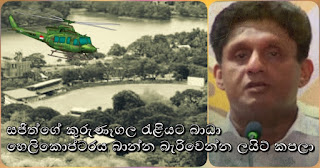 It is reported that last afternoon as it was informed in advance about the rally which was to be held in Kurunegala was sabotaged by the municipal council belonging to a political rival party and under such circumstances the helicopter not being able to land at Welagedera playground had to be abandoned, it is reported.

As a result presidential candidate Sajith Premadasa has been derived of the opportunity of addressing the Kurunegala rally and state minister Ashoka Abeysingha informed those who had gathered that the deputy minister was not able to present himself because of this unanticipated act of sabotage.

In the meantime deputy minister Ajith P. Perera has informed that it was officers of the municipality connected to Sri Lanka Podu Jana Peramuna who had disconnected power supply on purpose so that Mr. Sajith Premadasa would not be able to present himself at the rally. A former secretary of the mayor of Kurunegala municipal council happens to be MP Johnston Fernando.