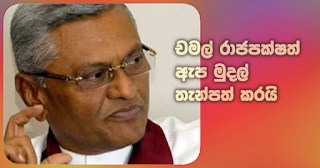 Brother of former president Mahinda Rajapaksa, former speaker Chamal Rajapaksa has made his cash deposit for the presidential election in the capacity of an independent contestant across Sri Lanka Nidahas Podu Jana Peramuna this evening (4).

There were rumours earlier that if his brother was to keep away from the presidential battle that
Chamal would take over. True to these rumours, he has obtained documents certifying his membership in parliament from general secretary of parliament it was reported this afternoon. By now it is reported that he has even deposited the cash. This then is the first occasion where two individuals of the same family have deposited cash in view of presidential candidacy.

Though discussions are underway between Sri Lanka Podu Jana Peramuna and the SLFP by bringing up an issue about a Pohottu logo, if Chamal is to come forward in the fray on behalf of Mahinda faction ... that logo too will not be Pohottuwa. In any case whether Chamal embarks on this fray or not would be finalised on the verdict by supreme court about Gotabhaya Rajapaksa's citizenship.