5 of Ranjan's calls that shook the country 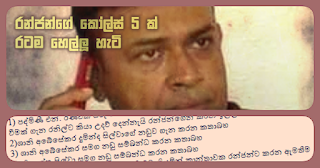 5 of Ranjan's calls that shook the country

In the event of MP Ranjan Ramanayaka being taken into custody over charges in connection with the license of being in possession of a weapon, after a search of his home by police, data taped on his phone by now has begun to circulate within social media. Even before being given bail after arrest, this production which were in the hands of police have got into the hands of  politicians, the clergy and media correspondents, it has been observed. been further noticed that of
those, tapes advantageous to the present government and some groups have been released. And it has It was thus noted that police who took Ranjan into custody have made these get into the hands of politicians and the media.

Voice cuts that have by now come into the oen are as follows:
1) Dialogues exchanged with Shani Abeysekera about Duminda Silva's case.
2) Hon. chief justice Padmini N.Ranawaka of high court after hearing Duminda Silva's case, asking Ranjan to request Ranil for a promotion.
3) When Nishantha Silva was transferred, dialogues that ensued to connect Ranil.
4) Conversations with Shani Abeysekera in connection with court cases.
5) A female making a call to Ranjan saying that she is able to supply a girl of 19 years.

In the meantime state minister Mahindananda Aluthgamage and minister Wimal Weeravansha have told media that apart from those voice cuts, there are a further lakhs of telephone conversations and those are being inquired into. Further, Hiru news yesterday broadcast, making a revelation that a Ranjan - Shani - Padmini conspiracy is prevailing in the background about making former member of parliament, Duminda Silva a convict and who is presently subjected to death penalty because of a case of homicide.

It was revealed across that news broadcast how Wimal Weeravansha, Lakshman Yapa Abeywardena and some MPs express that that Duminda Silva cannot be a convict under these circumstances. Shani Abeysekera who directed the CID over a number of serious crimes during the Mahinda Rajapaksa regime has at present been transferred as assistant to deputy inspector general of police of Southern province and a rumour is afloat that in order to accumulate evidence to take him into custody, Ranjan's house was searched and these tapes were secured. Also, there is some news to the effect that in order to prepare the necessary background to justify that Duminda Silva is not guilty ... these tapes are being utilised.

Whatever it is, Ranjan Ramanayaka who has responded in this context says that it further confirms that even if matters pertaining to corruption is delved into on a regular basis researchwise,it is his job to reveal about those whom he had associated as those who provide him with the information. With regard to a female informing that she is able to provide a 19 year old girl Ranjan had said that it was another instance of associating various people where he is in search of necessary information.

In any case, those who engaged in connecting with Ranjan over the telephone and spoke various things are in dread as to what would be revealed in future and also top rungs connected to the field of justice as well, today's newspapers have reported. The 5 voice cuts which circulated in social media are as follows
All Ranjans Recordings - Click