"I am not a racist" -- President tells India's Bharath Shakthi newspaper 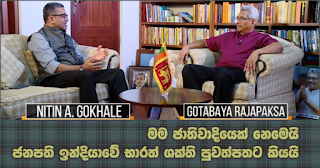 "I am not a racist" -- President tells India's Bharath Shakthi newspaper

President Gotabhaya Rajapaksa in an interview conducted with Narin Gall of India's Bharath Shakthi newspaper has said that as a country Sri Lanka would not come in between conflicts of big powers in the world and that Sri Lanka will remain a neutral country. This is the first discussion Mr.
Rajapaksa has entered into after he commenced duties in his post.

The president who expressed his opinions further on that occasion said, "As a nation we would stand neutral always. This I mentioned at the moment when I was taking my oaths. We are positioned in a very important network of oceans. All sea routes from East to West are across our country. In special, when Asia keeps developing fuel of Middle East and minerals in Africa come through this route. Therefore this oceanic route should be free. Since it is important to the whole world, it should not belong to one solitary party as such.

We are a small country. We can't go forward by choosing one country. We will not come in between conflicts of world powers. At the same time we cannot maintain an equilibrium with everyone either. We will not put our hands in any matter which is a threat to any country. We should think about the interests of India. We will not do anything which is a threat to India's safety. Though India is a powerful country, we should function as a sovereign land. We at the same time look into activities of other countries and it can't be done by being stationed at a limited location. We have to be open while protecting things in our own country. That is why we need support from India, China, Malaysia, Indonesia, Japan, Singapore. During Mr. Mahinda Rajapaksa's time alliance was maintained with China solely in a commercial way; but the world analysed this right from the start in a different manner. They even interpreted Hambanthota port as a threat to India. We need the port of Hambanthota. China is essentially a very close comrade of ours. But what I say is that the decision to lease Hambanthota port for a lease of 99 years is a miscalculated one. We hope to bring it once more to the discussion table. People in the country are not in favour of it. We don't think about a short period. Handing over a property of land for some commercial purpose is a different matter. Building up a hotel, making buildings is a different thing. But offering a port in a methodological sense and which is of economic value in this manner is something that must be thought of once again. Offering one terminal is not something to find fault with ... but handing over a port is a different thing -- that is my opinion. We need to work with India as well as China. I must say that countries such as India, Singapore, Japan and Australia being apprehensive of Chinese negotiations is justified. But then our transaction is commerce. We do need foreign investment. I invite countries such as India, Japan, Australia and Singapore to come and invest with us ... don't let only China make investments and end it there. Government of such countries should sound the private sector to come and invest with us. Not only that; those countries can make imports from our country ... the people have identified me as the secretary of defence. I am a disciplined person. I am not a racist. I don't work for only one section of society. That is why I welcomed every person to join with us. People may see me as a dictator. But I am not like that. What I tell the Western media is to get in touch with me ... speak to me.

We are a small country. Everybody is speaking about what happened in our country during wartime. But what happens in wars among powerful countries are not revealed ... that is unjustified. We are Buddhists. We are a peace-loving nation. I invite the Tamil diaspora to give a helping hand to people of this country".