An attempt to usher in Navin for UNP leadership -- Signs of Ranil, Mangala, Malik chucking up permanently 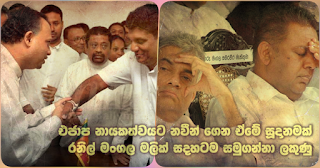 An attempt to usher in Navin for UNP leadership -- Signs of Ranil, Mangala, Malik chucking up permanently

The crisis which prevailed for sometime about the leadership of United National Party has emerged with the presidential elections this time in a decisive manner with a new facelift.

Even the delayed candidacy for was provided for Sajith Pemadasa because of this crisis as an indirect form of  penance, it was reported elsewhere. What was stated in a letter of conditions which came to
the open after the presidential elections were some promises gone into by Ranil before Sajith took over the candidacy. According to what was mentioned there was that just as much as there is no opportunity to install a prime minster, a new parliament is to be hastened under Sajith with the motive of forming a new government with an executive prime minister which provides more powers for Ranil with the 20th amendment. It was also mentioned that Sajith was influenced by saying that Ranil was aware in advance that Sajith would not win and that he would be prime minister in the future too during the propaganda campaign. Even Ranil Wickremasingha's brother had not operated his channel on behalf of the UNP with the idea of promoting a win for UNP. In the meantime there are criticisms that Sajith was given candidacy with the idea of 'there you are ... you asked for it; now having tasted it ... get to a side and wait'.

Commemorating Sajith's defeat, in the meantime a party had been held at a Battaramulla house of a stalwart of the UNP and that Navin Dissanayaka too has attended this party. Accordingly it has come to be known that leader Ranil would be relinquishing his position from the UNP and would be appointing Mr. Karu Jayasuriya or some other person for temporary leadership to manipulate the next general election and after the elections Karu's son in law Navin would be appointed for leadership of the party.

Thus reports are published that there is no confidence for the UNP by Ranil's faction under Sajith, Navin has been summoned to take over for that position and thus signs of a power struggle is in the offing between Sajith and Navin.

In the meantime, general secretary of United National Party Mr. Akila Viraj Kariyawasam had held a media briefing yesterday and had stated that it is futile to accuse each other over the defeat of the presidential election. The MP further mentioned that leader Ranil Wickremasingha plus all ministers and MPs as well as provincial leaders of both sexes worked for the victory of his or her candidate's victory and that nobody could point a finger in that direction and that everybody at Sirikotha headquarters worked irrespective of day or night. He also added that, "Many fathers for victory ... many illegitimates for the defeated".  Further, Akila gave a hint that Ranil was to pull himself out from the party in order to prevent the party falling asunder because of this crisis.

In the meantime two stalwarts of United National Front, Mr. Mangala Samaraweera and Mr. Malik Samarawickrema have decided to bid goodbye from politics, it was published in a recent weekend newspaper. Ministers Mangala and Malik who were strong characters in the propaganda campaign of Mr. Sajith Premadasa in last presidential election have totally resigned themselves from their positions after the election defeat. They have even kept themselves away from parliamentary group meetings and sensational comments uttered by Mr. Mangala Samaraweera about the Buddha dhamma sometime back was even subjected to serious criticism among UNP Mps. That newspaper has reported quoting unofficial news sources that after leaving his ministerial portfolio, Mr. Malik Samaraweera is to engage himself fulltime in business activities while Mr. Mangala Samaraweera might migrate to a South American country to reside there.