Will Iran - America conflict that cropped up because of Solaimani murder ... extend to a world war? 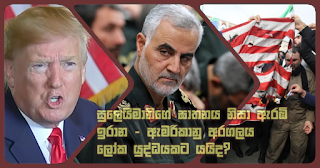 Will Iran - America conflict that cropped up because of Solaimani murder ... extend to a world war?

As a result of a missile targeted by America to Baghdad international airport towards early morning hours last January 3rd, Friday ... air force commander of Iran and major general Qaseem Solaimani who functioned as the commanding officer of the revolutionary guard corp embraced death. Solaimani being murdered was a premeditated revenge carried out by America. The closest reason for it is being that a few days prior to the incident, on December 27th, as a result of an attack launched at a zone where American forces are
stationed in Kirk in Iran by Solaimani, an American contractor died while 4 American nationals sustained injuries.

After Solaimani lost his life from American air attacks on January 3rd, the American flag was installed in Trump's social media accounts and a short while later president Donald Trump accepted responsibility for the murder by stating so in a message directed to his Twitter account. "Qaseem Sulaimani has over a long period of time killed thousands of Americans or brutally wounding them and has been conspiring to kill several others. He should hold himself responsible either directly or indirectly for the deaths of millions with a large number in recent times".

At the moment the murder took place, these officers have been travelling towards Baghdad airport in two high security vehicles and American rocket attacks were launched at them. These officers as well as five others died in this American operations.

Whatever it is, expressing protest at this attack, Iran's minister of foreign affairs, Jivad Shariff has said that this behaviour of America is nothing but international terrorism. He says, "United States should bear all consequences and responsibilities of its heroism". In the American attack, Iraq's army commander, Abu Mahadi Al Mahandis too lost his life together with Solaimani.

Iran president, Hassan Runi has mentioned that Iran would definitely take revenge for this crime committed by America. He further said that the determination taken by Iran to rise against America's thuggery and to safeguard Iran's values has increased two-fold with this murder. Russia has expressed her grief in connection with this attack and has made a plea from both parties to proceed with patience at this moment.

By now a cold war has erupted  and 2 rocket attacks targeting American consulate office in Baghdad and 50 miles away from Baghdad were reported. Foreign spy services have said that in times ahead there is a strong potency for a strong cyber or other attack being launched, targeting America. In the meantime what was reported yesterday was that Iranese state department has made an announcement for Americans to vacate the country with immediate effect. The American football training session which was scheduled to be held in Dohar-Qatar in the month of January has been cancelled.

General Qaseem Solaimani was in his 62nd year at the time of death and was the the most powerful army commander in Iran. He was an exceedingly popular character in Iran and it was said that next to Iran leader, Ayatullah Khomeini; he was the most respected among people of that country. He was in fact named 'Rock star general' in Iran. The majority of time of his 62 years he spent amidst areas of authority to stabilise Middle East. Solaimani has provided leadership for Quds corps for a period of 21 years. It was by utilising this corps that he managed to dispel army forces of Iranes and Hesbulla from Lebanon. It was with capabilities of the intelligence service and the army which in fact was behind Soleimani's screen that it was possible to extend his operations upto Iraq and Syria.

Funeral procession of Iran's army commander Qaseem Solaiman who died from an American air attack began yesterday from the green zone of town Baghdad, Iran yesterday (4) and a large had attended the occasion, the media had reported. This funeral activities would go on for 3 days.

While these activities were in operation, three rockets were launched targeting the American air base and two of those rockets had dropped somewhere close to the soldier quarters. However no information was reported of anybody being wounded. It was also reported that crowds had walked the streets expressing their grief and protesting against America. They had been carrying the Iraq and army flags as well as images of army leaders. In their hands were placards such as, 'No Israel ... Death to America!'. Iraq president Adil Abdul Mahdi and armed forces were present. General Soleimani's body was taken to Kuseisthan in East Iran and from there was taken to a holy city known as Mashad in Iran.  The state media says that the body would be taken to Keirman in central Iran, his birth-place and subsequently the body would be buried their on Tuesday the 7th. A three-day of mourning has been declared in Iran on behalf of the general who lost his life. Critics have issued forecasts that with this attack a war-like situation is in the offing between America and Iran. 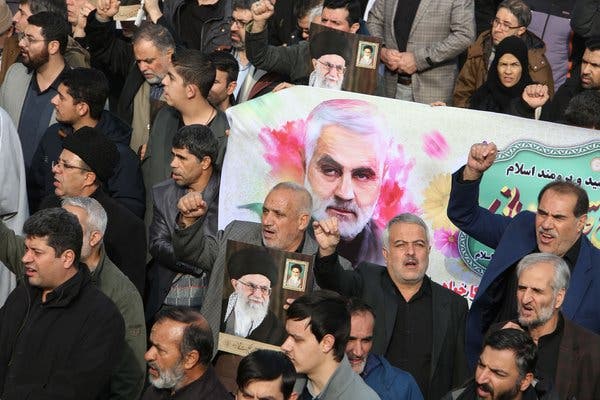 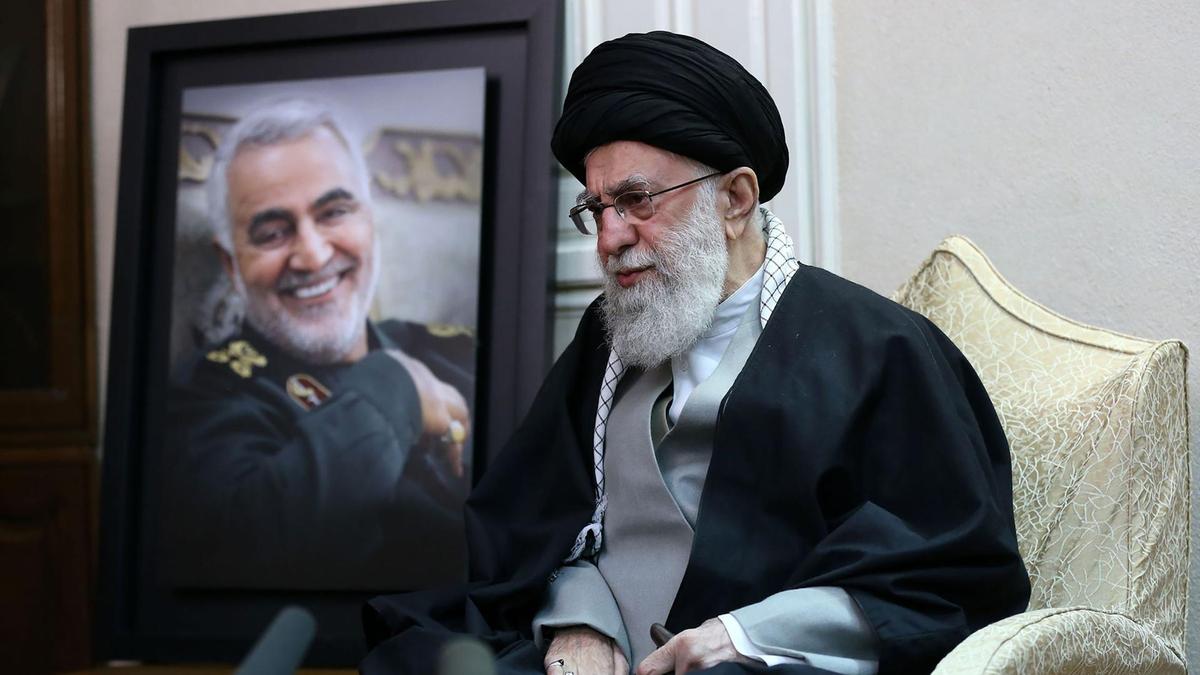 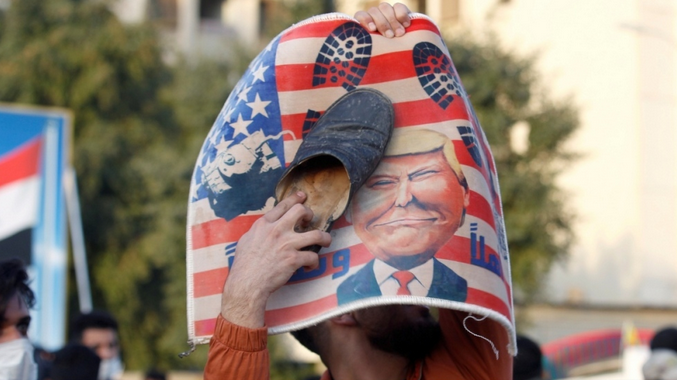 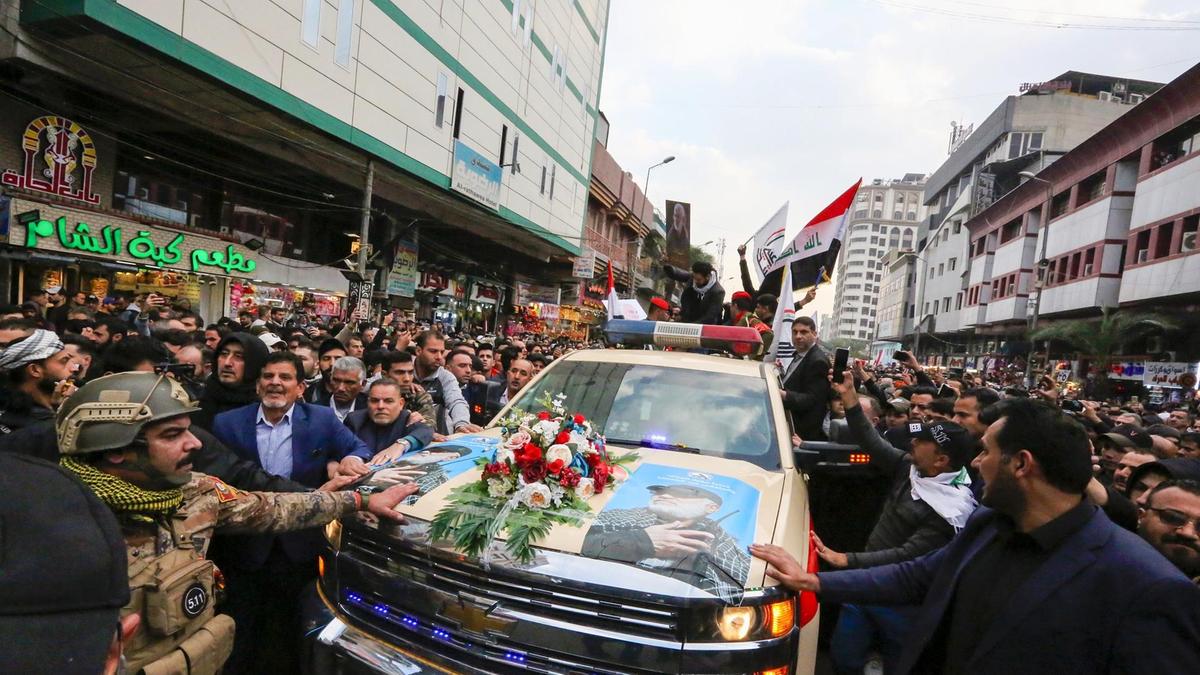