Untold stories of officers who died in Haputale 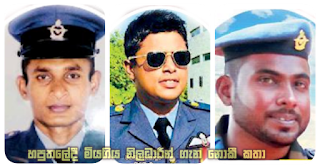 Untold stories of officers who died in Haputale

One of those who lost his life among the three dead in the incident where an aircraft belonging to Sri Lanka Air Force last 3rd was lieutenant K.M.D. Lankapura Kulathunga of Gampola who was hoping to enter into marriage in the near future. This is what his elder brother Bandara Kulathunga said: "My only brother spoke this morning to our ancestral home and nangi whom he was to marry saying, 'We are now about to go into the skies. After going on this journey I'll be coming
home in the evening. Have something tasty to eat for dinner. I'll be coming soon". But none of us thought that he was to come tonight in a coffin". 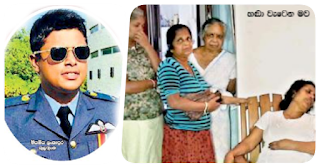 Deceased Kulathunga is someone who was born in Wegiriya, Hodiyadeniya and after his initial education at Kandy Dharmaraja College, he joined Kotelawala Defence Faculty and thus joined Sri Lanka Air Force as a cadet officer. His brother says that Kulathunga was engaged as an air pilot for over 4 years. "Only mother, appachchi, malli and I are at home. He had a desire of becoming a pilot even from his small days. Because of that desire malli enlisted with Kotelawala Defence Faculty. Malli is now 26 years old. He was to marry. She works at a state bank in the village. His marriage was to take place on March 3rd. Mother and appachchi are retired teachers. Both of them had big hopes about malli. How this accident happened we still don't know. It was in the afternoon that we got the message. Mother becomes so happy when a telephone cal comes saying that malli is coming home. Even before new year dawned, he visited us at home".

Wife of Air Force soldier who died in the crash, Mr. Nuwan Lahiru Darshana Hettiarachchi (31) of Weerawila Air Force camp, Mrs. Dianee Chathurika (28) said: "When I was getting ready to go to work at about 8.30 in the morning ... I got a telephone call from husband. He said that he would take leave and come on 15th and as he is getting ready to leave to work he would call after 12 in the afternoon. When I was on my way to work by bus to Matara, I came to know across facebook that an air crash has taken place in Haputale. At the same time a friend of my husband called asked where I was and asked me to turn back and go home. At that moment I tried to contact husband over the phone .. it was not responsive". 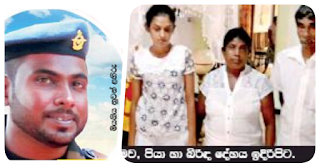 Mr. Hettiarachchi who unfortunately lost his life by trying to avoid a major accident in the company of three Air Force comrades was a resident of Muruthamuraya, Thelijjawila, Matara. He was the youngest in a family of four brothers and sisters. He was an Old Boy of Dampella Maha Vidyalaya. These four children including Nuwan were brought up by his father Mr. H.A. Premadasa (61) and mother Mrs. Pushpa Irangani (58) having engaged in labour-work. His eldest brother Champika Darshana (38) was a bus driver. The eldest sister Achala Hettiarachchi (36) is married and staying separately. The other sister, Geetha Shanika (34) is not employed. It was only Nuwan who was engaged as a government worker in that family. His wife is a nurse at a private hospital in Matara town. Nuwan entered into marriage through a proposal on October 25th, in the year 2018. Fate struck even before an year and three months elapsed after marriage.

Nuwan's mother Mrs. Pushpa Irangani who recalled memories about her son had this to say: "After school education son joined Akuressa youth corps and had his training there. Later he even followed a course on air-conditioning. It was at his own will that son joined Air Force in the year 2009. He had his training at Koggala and Ekala camps and his special ceremony was at Diyatalawa Sir Force camp. Subsequently he was attached for duties at various places such as Pidurutalagala, Nuwara Eliya, Batticaloa etcetera. It was about six months before this that son came to Weerawila camp.

Whenever possible, son would take leave and come home. He spent a fine family life with his wife. Son came on 2nd night and got ready to set off to work around 5 in the morning. When I brought a cup of milk tea and gave him ... he drank two gulps and asked me to drink the rest. As he was getting late .. he bowed down at my feet and set off as he was getting late. It was only later that I came to know that my darling son has met with an air crash. It was with great endeavour we brought him up. In the end I couldn't even have a glance at my son's face". 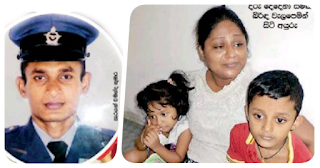 The dead body of Air Force sergeant, 38 year old Dikwella Vidanage Chaminda Kumara living at No. 681, Senapura, Tissamaharama who died from the air crash was brought to his house and on that occasion his wife Kalawana Koswaththage Iresha Maduwanthi, a 36 year old mother of two children had this to say: "My husband's life was the two children and I. My husband had hopes for the future as far as the skies. This second, before setting off to report for duties my husband carried the two children in his arms before leaving. With the void of my husband all our hopes were ended up in a dream. When Air Force sergeant Mr. Chaminda Kumara's body was brought to his house, people in the house and those in the neighbourhood rocked there to see his body and pay their last respects.

On either side of the road, white flags and banners of sorrow were seen displayed. The moment when his corpse was laid in the house, the sound of weeping heard from his two children, five year old Nethuka Damsiha and four year old Udula Thihari brought tears into eyes of those who gathered there. "Had a thousand dreams about life". Chaminda Kumara's wife, Madhuwanthi who was to tread a long journey in samsara said in tears. "We married after a romance of several years. I believe that our union was a bond in the journey of samsara. He gave so much love, affection and kindness to me. We were getting ready to admit eldest son to year one in school. My husband spoke about it frequently. He had big hopes and desire about son's schooling.

He had to regularly report for duties on second morning to Weerawila Air Force camp. That morning before setting off from home he both children close to him and carrying daughter in his arms, left home saying, "I'll bring everything putha needs to take to school". My husband had got a transfer to Colombo from the seventh. He was never backward in carrying out duties at any location in Sri Lanka. Even during the war, he was actively engaged in duties in the North. He had big hopes about the country. What he always said was that our future generation should have a free country.

When he left home on second morning I never thought he would have to go on his last journey amidst Air Force honours. But we had to face an unfortunate tragedy which none of us thought of", she said. Sergeant Mr. Chaminda Kumara who was attached to duties at Air Force for a period of about 16 years is expected to take leave of his staff-comrades, beloved wife and two children, parents, relatives and companions at Tissamaharama Senapura.