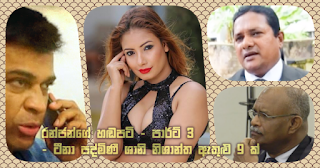 In yet another one, is found a voice cut relating to judge Padmini Ranawaka, another shows 3
conversations with Shani Abeysekera regarding various matters and 2 conversations with Nishantha Silva while the other is a conversation with a representation of Champika Ranawaka were found among them.

The discussions were centred on obtaining instructions on films from Shani Abeysekera; to find out what transpired in the Saharan incident and the Avant Garde call of Mrs. Dilrukshi and also Ranjan inquires from Nishantha Silva about putting Namal and Johnston in. In the process a discussion takes place with one Mr. Amal to the effect that Sajith is not suitable. Information is inquired from a representative of Champika of putting Gammanpila in. All, from below