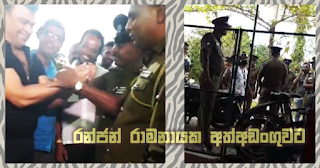 7.25 pm
After search operations by police, member of parliament, Ranjan Ramanayaka was taken into custody. Ranjan said that it would be great boost to his popularity. Even before being handcuffed by the police officer, Ranjan hugged him.

6.55 pm
After search operations conducted by police, it was indicated that Ranjan has committed an offence
of keeping in his possession a pistol without a license, 127 bullets of 9 mm type and some documents.

6.50 pm
Ranjan may be taken into custody mostly for the offence of not renewing his MP pistol. Police conducted search operations at MP Ranjan Ramanayaka's house for close upon 3 hours and even by 6.45 in the evening it was not over. Whether Ranjan was taken into custody was not announced even by that time.

Time was expended to record some productions gathered during the search in police books. In the meantime, Ranjan Ramanayaka has made a comment in his Twitter Account police have not mentioned as for what purpose a search is being done. He further said that he always stood on behalf of truth and if he is to be taken into custody ... he would not go to hospital but prison.

5.30 pm
Police who carried out a search on Ranjan Ramanayaka's house, some CDs and a computer belonging to him was taken into custody together with the pistol which had not been renewed after 2016. Member of parliament Ashu Marasingha has arrived at Ranjan's home and had been inquiring into this.

4.30 pm
UNP member of parliament, Ranjan Ramanayaka's MP official quarters  situated at Madiwela was subject to a sudden search operation this evening (4). This operations was conducted by officers of South Western province crime division under a court order, it was reported.

When police arrived for the search, the place concerned was infested by teams of media cameramen. How search operations was in progress was being broadcast 'live' by Ranjan Ramanayaka across facebook. The officers who came there had said that since they had come on orders ... to provide them with co-operation in the proceedings. Thus, accordingly it is seen in the video how he cordially extended his support. It was not mentioned whether anything was found in the search as such.