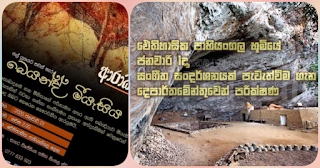 An inquiry is to be conducted by Archaeological Department about a music festival being held in relation to the archaeological site of Pahiyangala.

This music festival which is supposed to have been conducted on January 1st launching a promotional campaign announcing 'Come to Pahiyangala cave to start 2020. A teacher and some
others had conducted a music concert in the land close to Pahiyangala cave and commissioner general Mr. P.B. Mandawala said that an inquiry is underway in this connection.

Though viharadhipathi close to a vihara and some others have requested for permission from Archaeological Department to conduct this music concert inside Pahiyangala cave; however as no consent was granted for it, the said concert had been held by force, it came to be known. A complaint has been lodged in this connection with Bulathsinghala police. The commissioner general also mentioned that Pahiyangala archaeological officers have been provide a full report on this music concert. The commissioner general further stated that if any activity is to be launched in any archaeological land .. permission should be obtained from Archaeological Department. Seen below are promotional leaflets published within social media in connection with the said music concert.