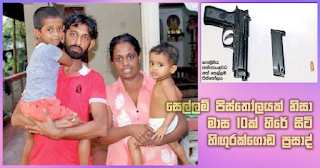 A father of two by the name of Prasad in Hingurakgoda has complained saying that he has had to stay behind bars for 10 months until government analyst's report was forthcoming after being produced before court under the understanding that he was in possession of an automatic weapon produced in a foreign country when he was taken into custody by Hingurakgoda police over a toy pistol which he had kept with him. K.P. Prasad Kumara, a thirty year old father of two children and a
resident of Pinpara, Hingurakgoda was thus imprisoned after being arrested on suspicion.

This is what Mr. K.P. Prasad Kumara who was incarcerated for close upon an year because of a toy pistol had to say: "I must first of all say that I lost my job as well as my elder brother's job was lost because of saying that this toy pistol is an automatic weapon. Today our wives and children are suffering. Saying that we are underground elements ... my elder brother's job was suspended by his employers. I in any case lost my job when I went to prison.

Hingurakgoda police barged into our house and shouted "There's a pistol .. take it!' I said that there is no such thing. After that they searched the whole house and took this toy pistol in the almirah. They took that and took me too to police. I told them that it is a toy pistol. Police didn't care a damn for it. I told them that I brought it from my elder brother in Divulapitiya. He collects various models. I saw it and brought it with me because it's attractive.

After that I was produced before Hingurakgoda court on February 13th and after securing a detention order I was brought to police station and was interrogated. So what can I say? I can only say that I brought it from my elder brother's place. Again I was produced in court. That day I was imprisoned. I was in Polonnaruwa prison. From that day onwards, twice a month ... for nine months I was brought to Hingurakgoda court. On every such occasion what the judge asked from police was whether the government analyst report has come. When police replied in the negative .. I was back again behind bars. Not being able to bear up anymore, we contacted a lawyer and wrote to government analyst twice reminding him. But received no response.

Somehow in the end I was found not guilty by Hingurakgoda court on 17.11.2019 and freed. I asked the lawyer why I was set free. He said that government analyst has sent a report saying that it is a toy pistol. By the time that report came ... my elder brother had lost his job. As people in the village refused to give him any work; he has gone to distant villages and earned his living to give his children to eat.

At the time I went to prison, my daughter was just 4 months and son was 5 years old. The villagers were heard saying the whole time, 'Underground fellow's wife and two children!'. She had suffered terribly in not being able to breast-feed the baby and to give to eat. She in fact suffered so much without having money even to visit me at court and prison. Because of a toy pistol my children today are deprived of food and clothing. Any known person will not care to a give a job at any place saying that 'He's an underground fellow who went behind bars for keeping a pistol with him'. I and my elder brother had to face these dire circumstances because of the fault of the police and the government of our country. In future both these parties should take caution to see that things like this will not happen in future.

However much the world has developed, today it takes an year or two in Sri Lanka for the government analyst's report to come. This should immediately change. If not, innocent families with children like us will have to drink poison. Not carrying out the government analyst's duties in time and police filing to do their duties, thousands of people in our country have to be under bars for years. That's because of the fault of the officers. I plead from the president to appoint at least one government analyst for each province and immediately put a stop from being imprisoned without fault for years in this country.

Not only that, the police took my mobile phone and national identity card into their custody when police took me into custody. Later the the phone was given ... but not the identity card. After being released, I went to Hingurakgoda police and told them that my identity card was taken that day and was not given back to us. Police are asking me to say that it was lost and so to make a complaint. They told to lodge the complaint saying that it was lost on February 15th, 2013. By that time I was in prison. By that time what I had was only the clothing I had on my body.

So that's the way in which the law of the country functions on the poor people in our country. I had to spend 1 months behind bars for a toy pistol. Police lost my identity card and then ask me to make a complaint saying that I lost it in town on the ay I went to prison. There .. that's the law of this country. Because of the injustice that happened to me ... by children have become helpless. I don't have a job. I don't like to engage in things like dealing in narcotics, looting. We are poor people. When there's no money to handle requirements of the children ... when children cry asking for those things ... we can't bear up".