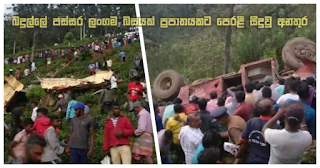 A CTB bus which was heading towards Ekiriya via Passara Madolsima has fallen into a precipice at Madolwaththa 6th milepost last evening and 8 commuters have lost their lives, police say. About thirty people who sustained injuries have been admitted to Badulla general hospital and Passara district hospital. This accident occured when the bu toppled into a precipice at sixth milepost along
Madolsima Road. This accident was responsible for bringing death also causing injuries to a large number of people.

Police were engaged in transporting the dead and those who sustained injuries to hospital who were inside the bus which fell into the precipice of about 500 feet from the road. According to latest reports, it was reported that 8 persons have lost their lives from the accident. A further 30 people who faced injuries have by now been hospitalised.