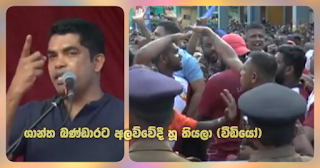 Many SLFP MPs who get on stage at presidential elections this time were subjected to an unpleasant moment of hooting. The reason for that is for having joined the SLFP - Maithri camp at the last election or after that ... leaving Mahinda.

Though three instances of placing the signatures were seen on behalf the SLFP - SLPJP alliance and
these incidents took place at external rallies and it was for this reason that Dayasiri Jayasekera refused stepping on stage in Kurunegala. Member of parliament, Mr. Shantha Bandara who joined a public rally held in Alawwa in support of Mr. Gotabhaya Rajapaksa's victory was greeted with hooting. Seen below is the video of that instance