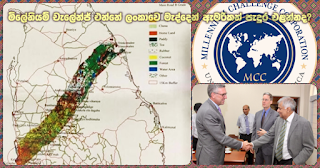 A big discussion is taking place these days about the Millenium Challenge Corporation (MMC) and related programme. Wimal Veerawansha, Mahinda Rajapaksa and those of the opposition have expressed their opinion that it could be a disguised American colony. Minister Mangala Samaraweera has boasted about acquiring this aid indicating that it would be possible to get a large sum of monies as an aid which need not be paid back and with those funds it would be possible to set up a light
railway system be established to curb congestion of traffic and in addition several facets of development could be launched as well.

Whatever it is, close upon the the period of 52 days when government changed last October, 2018 and when that agreement was documented, because of political instability it was delayed and it was once again tabled to the cabinet and approved last week. In the process, president Maithri has subjected it to consideration again yesterday and has alerted that it be not signed before presidential elections.

In the meantime the ministry of finance has notified today that after the agreement is signed it would be brought before the Sri Lankan parliament and would be put in motion and that it would not be gazetted before it is not brought before parliament. It was informed that the MCC agreement would be drafted under guidance of the attorney general.

Millenium Challenge Corporation (MCC) is a bi-lateral United States Aid agency established by United States Congress in 204. They provide aid and benefits on a limited basis within a certain time-framework for developing countries which take action over corruption, respecting democratic rights and achieve a strict criterion of standard for good governance. According to the request of Sri Lankan government the ministry says that the MCC combined with the government and have carried out a survey in 2016 about lands and the traffic sector that are responsible for economic growth and according to its recommendations it was found that the traffic congestion in the capital of Colombo , transport links or connections between areas becoming weak and setbacks in administration of lands have contributed towards growth of the economy. Under the above circumstances in order to fill the monetary void for the above projects the MCC has consented to grant a sum of 480 million American dollars, finance ministry says.

About 6 months before Wimal Veerawansha launched a protest against this agreement and what he said on that occasion was that America has asked for a separate zone across Sri Lanka and by saying that investment opportunities would be provided and that an opportunity would be available for foreign companies to purchase lands in Sri Lanka by such a process.

Wimal further made allegations that the team attending to preparation of reports in connection with Millenium Challenge project are lodging in Temple Trees and have worked in an office there ... it was a project by Ranil of betraying the country. Though Wimal and the media network have launched to the effect that an American corridor is being prepared across Sri Lanka, it has still not been revealed whether such a thing is to be implemented by this agreement.

Incidentally, Millenium Corporation is in reality not a project of the American administration.It in fact an independent aid programme. Since it is actually an aid and not a loan ... repayment of interest is expected. In this context an opportunity to develop transport facilities of Sri Lanka has been at disposal and because of political tug-of-war it is being delayed. Whatever it is, member of parliament and co-media spokesman of Podu Jana Peramuna, Keheliya Rambukwella  held a media discussion at Colombo Mandarin hotel last 26th remarked that under their government they would consider an investigation would be launched regarding signing agreements with Millenium Challenge and SOFA.

In the meantime, Mahinda Rajapaksa has made an announcement asking that this agreement be postponed till the presidential election is over and that no steps should be taken without looking into these matters much. President Maithri who showed no signs of opposition when the cabinet gave their approval last week has mentioned not to sign the agreement after considering this matter at hand.