"JVP will be favoured this time with 20 lakhs gay votes!" -- Sherman 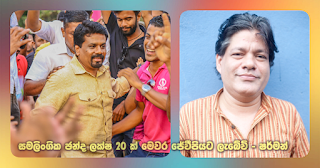 "JVP will be favoured this time with 20 lakhs gay votes!" -- Sherman

A special number of pages have been allocated in connection with rights of the gay community in the manifesto presented for the presidential election by Jathika Jana Balavegaya this time and presidential candidate Anura Kumara Dissanayaka has taken steps to speak on that topic at public rallies. The LGBT community has welcomed the manifesto of Janatha Vimukthi Peramuna and the community has mentioned that they would favour Anura Kumara Dissanayaka with about two
million votes at forthcoming presidential election.

Pioneer member of gay rights activists, Sherman de Rose expressing his ideas to the Island newspaper today has said: "We are in favour of giving our support to JVP for having stated in their manifesto that clause 365 in the penal code would be abolished. There are gay leaders among leaders of Jathika Prajathantravadi Peramuna and Sri Lanka Pou Jana Peramuna holding offices. But they have not been able to find a solution to this burning problem of ours.

In code of criminal procedure act clause 365 (a) gay behaviour has been prohibited and a punishment of a 12 year jail term has been enforced. Even when Britain herself has removed this law from their books; but this law is in operation in Sri Lanka. We are aware that JVP will not be victorious at presidential elections this time. However, of the 22 million population in the country 10% according to statistics are homosexuals and bi-sexuals. A true change could be brought about to those statistics", he said.