Hiru goes to police ... saying that there is no media freedom 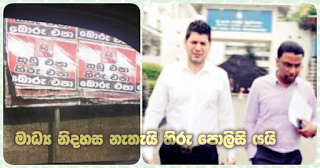 Hiru goes to police ... saying that there is no media freedom

Hiru who have been accused of engaging in partial reporting concerning presidential reporting these days and after posters "Kudu epa ... Hiru epa ... boru epa" with their logo being publicised, two chiefs of Hiru media network have directed a complaint to police headquarters yesterday In this instance Hiru chief executive officer Vincent Silva and news editor Sudeva
Hettiarachchi were present.

Reno Silva, chairman of Hiru media network and chief executive Vincent Silva both are brothers of Duminda de Silva who is under death penalty and is serving lifeterm death sentence and ministers Mangala Samaraweera and Thalatha Athukorala have last week made allegations that this particular media network is partially making an attempt to establish a Gotabhaya regime with the motive of securing freedom for life to Duminda de Silva.

What was pointed out by Ethi-ex consensus carried out according to air time allocated to 2019 presidential candidates by several selected Sinhala media  Rupavahini channels is that by comparison Hiru and Derana have devoted a unjustified space for Gotabhaya Rajapaksa in news broadcasts. Also accusations were levelled that only parts which provoke laughter to rival candidates are being selected and broadcast, thus distorting information. Minister Mangala Samaraweera has directed several complaints in this connection to election commission and what he had complained was that a statement made by minister Fauzi to the effect that 'Gotabhaya should be assassinated' has been subjected to serious distortion. A police investigation too has been launched in this connection.

With regard to these accusations what Hiru media network say is that they are not partial as said in that manner but that ministers and organisations that attend to activities of pasting posters linked to the government trying to destroy media independence are involved in this matter. Some employees attached to Hiru media network have by now prepared a symbol with a clenched fist on a black-coloured background with the words "Battle starts on behalf of Hiru freedom" thus changing profile pictures of their facebook account. 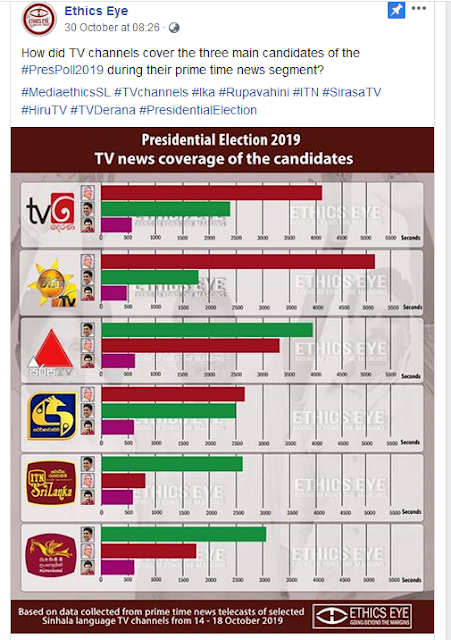