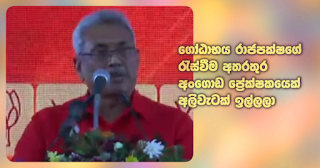 When presidential candidate Gotabhaya Rajapaksa was addressing the crowd at the Sri Lanka Podu Jana Peramuna rally held in Angoda, Kolonnawa in Colombo last 31st, an incident where a spectator has made a request was spotlighted by a rupavahini channel today.

What this member of the audience has requested was to 'erect an elephant fence'. It was seen that
when this request was made, Gotabhaya has though heard it has proceeded to carry on his speech as if he did not hear it. The question that springs up in this context is for what purpose a person living in Angoda area has had the necessity to ask for an elephant electric fence. Bringing crowds from outstations for meetings such as this is of course a common factor and to give the impression that they are people from the area where the rally is held. Thus it could be assumed that a resident from a far away place who attended the rally could have made this request on behalf of his area.

Relevant video, from below