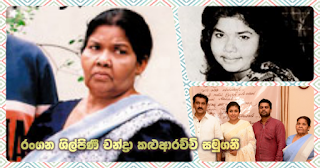 Well-known actress who left a memorable name for sometime in tele stage plays and films passed away this afternoon (1) and she was in her 76th year at the time of her death.

She is the wife of distinguished musician Mr. Lakshman Wijeysekera and has a daughter and son. Her daughter incidentally is stage and tele drama actress, Ama Wijeysekera. Body of Mrs, Chandra Kaluaarachchi lies at the address of 140/31/5 at Kalapura, Galkissa and arrangements will be notified later.