'Yakada yaka' on strike for eighth day too -- Suffering public who hugs the train in perilous journey! 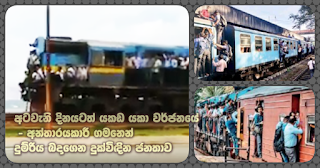 'Yakada yaka' on strike for eighth day too -- Suffering public who hugs the train in perilous journey!

A pathetic sight is observed of railway commuters undergoing great difficulties when the railway strike still happens to continue to the 8th day in succession with salary anomalies being their woe.

By now trains in operation have almost come to a total standstill while only a few trains are seen to ply up and down and a congestion is to be seen in the process. Some commuters are seen clinging to
whatever place they can cling to and thereby of course facing extreme risk.

In the meantime, the general manager of railway has notified that engine drivers, guards, controllers, station masters and administrative managers would be considered as having vacated their posts and a letter will be issued to them to that effect, it was reported. Published below is a video depicting such a perilous journey