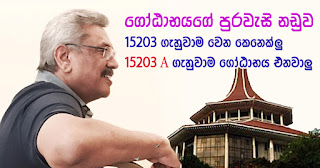 The petition filed in appeal court requesting a certiorari writ be issued to the effect  that the Sri Lankan passport, national identity card and authority confirming the dual citizenship of Mr. Gotabhaya Rajapaksa be invalidated when taken in for hearing, several contradictory matters were reported by now, it is reported. It was revealed in court that when the dual citizenship No. 15203 of Mr. Gotabhaya Rajapaksa was was directed to computer data, it shown the file of another person -- but when 15203 A was directed to the same number, Gotabhaya's name was seen appearing.

According to matters reported to court by criminal investigation department, this number appears to
have been added to the data base already available. Before this what the controller of immigration and emigration has informed was that files including Gotabhaya's application were not to be found in his office.

Mr. Gotabhaya Rajapaksa has applied for Sri Lankan citizenship somewhere during November 18 - 24 in the year 2005. Petitioners further say that no sooner the presidential election was won, the certificate for which Mr. Mahinda Rajapaksa placed his signature would not be legal. They thus argue as to how Mr. Gotabhaya Rajapaksa has obtained the passport and the national identity card by using his dual citizenship certificate which cannot then be considered legal.

Attorney at law Mr. Chanaka de Silva who appeared on behalf of minister of local government said that it is stated in clause 30 of the constitution in relation to executive powers of the president and that the constitution be read and understood in whole with relevance to the president's executive powers. He further mentioned that it is stated there that former president Mr. Mahinda Rajapaksa has powers to place his signature on the certificate relevant to dual citizenship look into whether the executive president has total powers.

Attorney general in bringing forward his points has said that former president Mr. Mahinda Rajapaksa is equipped with powers to sign the certificate pertaining to the said dual citizenship certificate but what should be done initially is to check whether the executive president has total powers, attorney at law Chanaka de Silva mentioned. He further said that when focusing attention on 17th amendment of the constitution it can be observed as a document of response. President's counsel Chanaka de Silva pointed out that according to clause 42 of the constitution it is stated that the president when exercising his duties during his tenure in clause 42 it is stated that it should operate across a cabinet.

President's counsel Mr. Romesh de Silva said that prior to the 19th amendment of the constitution a person operating in the capacity of a president during his tenure is immune to action taken during that tenure and that any action of his cannot be challenged in court either. He thus finally appealed that this writ petition which has been filed based on false accusations be abrogated in the first instance itself. Having taken these arguments into consideration, the judges are expected to deliver their verdict this evening at 6.