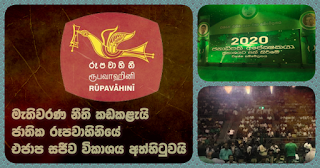 The Live telecast of the convention of United National Party which was in process this morning (3) at Sugathadasa indoor stadium had to be suspended rather abruptly. The reason for it is that though it was inferred as a paid programme which was broadcast, it was reported that the said transmission had not been paid for till the programme commenced.

Director general of election commission Mr. Saman Sri Ratnayaka who arrived this morning at Sri
Lanka rupavahini corporation has carried out an analysis then and there and subsequently having summoned accounts officers has called for relevant documents and was told that no such payment has not been paid till then and that it is to be broadcast on the understanding that it would be paid later.

However, director general of election commission has ordered that the live transmission be immediately stopped as it was against the law and officers who complied with the order have taken steps to suspend the broadcast. Accordingly, at the moment when a speech by education state minister Vijayakala Maheshwaran was in progress, the live broadcast of the convention of the United National Party had come to a standstill. The national rupavahini at present is under control of president Maithripala Sirisena which belongs to the ministry of defence.