Pafrel requests to check about Dr. Padeniya who comes and sits near Gota while on duty in hospital!! 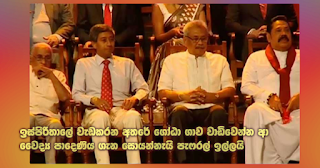 Pafrel requests to check about Dr. Padeniya who comes and sits near Gota while on duty in hospital!!

As specialist Dr. Anuruddha Padeniya, chairman of government medical association has violated the law by being involved in political affairs during the period taboo for government servants, the election investigating organisation has yesterday (27) requested the election commission to probe into this matter.

The Pafrel organisation has appealed in writing to assistant election commissioner that he had been
observed seated next to Gotabhaya at the rally where Podu Jana Peramuna has launched the series of Gotabhaya Rajapaksa last 25th and thus had engaged in political affairs where a government servant who has no rights for politics. The letter thus requests that an inquiry be carried out in this connection and due action be enforced. It is further stated that other trade unions too could resort to such procedures if such behaviour is carried out even on a trade union level.

Secretary of government medial association Dr. Haritha Aluthge has responded in this respect and what he says is that after taking into consideration the general public of the country government medical association has proposed policies to presidential candidates and it was only for that purpose and reason that Dr. Padeniya attended the said gathering on 25th. He also added that one of their representatives would be in attendance when Sajith Premadasa's is the launch latter's policies. The election commission has been alerted in this connection and the secretary has said that a discussion would take place at the meeting of the executive committee to be held today (28) regarding this matter.