If Ranil is totally eliminated ... SLFP will give total support to Sajith -- Maithri has said 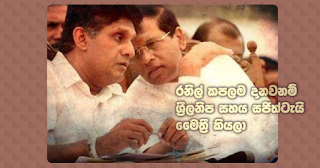 If Ranil is totally eliminated ... SLFP will give total support to Sajith -- Maithri has said

A very special secret meeting has taken place between president Maithripala Sirisena and presidential candidate Sajith Premadasa. It was said by Sajith's party that the topic of discussion centred only around environment of the country but nothing was exposed from the president's faction as to what was discussed. When questioned about it at a news briefing Sajith participated in, what he reiterated was, "I told once no that we spoke only about the environment of the country". But what in
reality has taken place was that a proposal is brought forward by the Maithri faction which incidentally happened to be a queer exchange, political news have reported here and there.

During the discussion which ensued between Sajith Premadasa and president Maithripala Sirisena day before yesterday night (1) was that president Maithri has inquired what conditions were laid down by Ranil and what privileges Ranil would get in case Sajith is elected to the position of president. Maithri has kept on questioning about Ranil.

It was also reported that subsequently Sajith has asked whether he had come there to talk about leader Ranil. On that occasion the president has informed in that instance, "Ranil is the problem ... we of course has still not leant on Pohottuwa, no. Basil came and spoke to me and went. But there's no end to this decision, no. But Sajith I like you. Only if you come I will like. Ranil is not necessary ... that's what I am saying". Sajith has then questioned, "Then what do you propose?" On that occasion the president has informed that he is prepared to sacrifice SLFP votes on behalf of Sajith under conditions. When Sajith has inquired what those conditions were, he has been responded with the words that if Mr. Sajith Premadasa is to be supported, if he becomes the president Mr. Ranil Wickremasingha should not be granted the position of premier and premier Ranil is not to be permitted for the presidential election. Sajith who at that moment has remained speechless looking up and down. It is also reported that the discussion has ended without any settlement as such.

It is also reported that only a discussion with the UNP is taking place an internal level by the Sajith faction about this sort of proposal referred to earlier in relation to the future presidential election. Though circumstances are such, there is no possibility of party leader Mr. Ranil Wickremasingha being left alone, Mr. Sajith Premadasa has informed his close associates and in future a consensus is bound to develop between the SLFP and the Sajith faction.