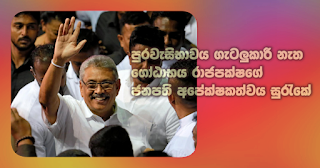 The writ petition implying that the citizenship of Mr. Gotabhaya Rajapaksa, presidential candidate of Sri Lanka Podu Jana Peramuna was complex was taken up for hearing and after it was taken in for hearing last 2nd, 3rd and 4th in supreme courts the verdict was given in his favour.

The three bench panel of judges decided to dismiss the petition, unanimously. Under these
circumstances the supreme court delivered the verdict of refraining from issuing the certiorari writ demanded by the petitioners. On the whole, the appeal that he was not a person who has obtained Sri Lankan citizenship and that the dual citizenship, the passport and the national identity card be invalidated was squashed by court.

Under these conditions, Gotabhaya Rajapaksa who has already deposited cash by now with aspirations for candidacy is still in validity and thus has the opportunity of contesting for the presidential election. It was professor Chandraguptha Thenuwara and co convenor of Puravesi Balaya, Mr. Gamini Viyangoda who have filed this writ petition.