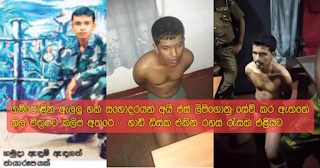 A team of policemen from Gampola yesterday took into custody another main suspect who was near the house of Abdul Jabar the latter of whom owns a shoe shop at Gampola and is the uncle of the two Haque brothers of the suicide bomb squad of Thawheed Jamad organisation. The two of them were hiding in this shop. The police team were thus able to get hold of documents of transactions amounting to over Rs. one crore, a laptop containing various video clips and a large number of accessories. Two national identity cards, two photos showing him dressed in army jungle attire with a
pistol in hand and a voice recording which gives advice for all members to be in safe hiding after the Easter attacks were found.

Records of financial transactions suspected to have been belonging to this organisation from the year 2017 and a large number of bank receipts were found. Various persons have donated financial aid in thousands of lakhs and about 200 such recordings are to be observed. In the same way, 25 bank receipts where money has been credited by various people have been found and investigation teams suspect whether those are given to members of this organisation.

Every video recorded by the press during the past about Thawheed Jamad organisation has been taped on the computer and mobile phone have been found while news released in connection with attacks have been saved separately here. In order to lead astray those inspecting this computer and mobile phone, lewd scenes are saved at the start here and afterwards this information has been recorded in files that were saved.

The two brothers Sadik Abdul Haq and Saheed Abdul Haq had after the Easter Sunday bomb attack remained in hiding in Anuradhapura and with the aid of a van displaying "Theruvan saranai", using Sinhala names had arrived in Gampola and remained hiding at their mother's younger brother's (uncle, by the name of Abdul Jabar) shoe shop on the second floor there.

According to what is revealed now, this shop has been bought by bomber called Saheed Abdul Haq. For this purpose, he has straightaway paid Rs. 65 lakhs, it has been revealed. Their uncle is running a trade centre for shoes, bags and various items and it is suspected that those items were purchased from monies of the organisation. It is further suspected that Abdul Jabar will not be able to stock a large quantity of goods such as this all by himself.

The top floor of of the house near Saliyala Temple in Gampola of Abdul Jabar where the shoe shop was in operation had been used as the operations centre of this organisation and Sadik and Saheed have taken prominence is such matters, it has been revealed. Abdul Sakkar Mohammed Asmil the suspect apprehended yesterday happens to be a 40 year old married man living in Hemmathagama area in Mawanella.

Saheed and Sadik too are residents of Mawanella while their mother is a resident of Nawalapitiya. Their uncle lives in Gampola area and activities of this organisation had been carried by using his Gampola house as its base. It has been revealed that for such a purpose a teaching post was afforded to one of the Haq brothers and a leading Muslim school nearby has encouraged them for this purpose.