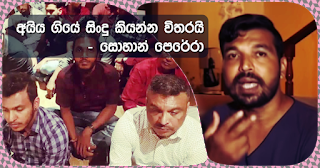 Well-known singer Amal Perera was taken into custody in Dubai together with Makandure Madush and Amal Perera's younger brother Sohan Perera has come before the media and expressed his ideas.

What he says is that his brother went with his son in the same manner that other singers go overseas for concerts for the sake of money and not without an understanding about the audience as such.
Whatever it is, what was exposed according to police investigations was that the raid to nab Madush was put in motion after knowing that Amal was heading to that spot.

Sohan Perera was a person who was arrested in Maharagama in November in the year 2011 for use of illicit drugs. It was revealed through the media those days and it was reported that he was taken into custody when he was returning after buying heroin from a heroin outlet supposed to have been situated down Perakum Mawatha, Maharagama.

This is what Sohan now says about his elder brother being arrested: "This is an instance where he participated as in a concert as he was told that he would be compensated financially. It was done with responsibility from sponsors downwards. But as a normal artiste he or she does not inquire as to whom he/she sings to, who the relevant person is at the moment a performance is accepted.

Now at this point a sorry state of affairs crop up in a mild way; not that my brother and my son is put into an inconvenient position ... it is how they are to be rescued in the face of legal problems relating to this issue in that country. But in this instance what we will have to forego is our two lives whether by a mistake of ours or otherwise. So because of that, if such a situation emerges ... the symbol called Mervyn Perera is forever finished from there".